On earth, we orient ourselves according to the points of the compass. According to Taoism the directions are divided into nine basic directions: North, South, East, West, Northeast, Northwest, Southeast, Southwest, and the Middle Direction. When the trigrams are arranged specifically in their appointed positions around the Yin and Yang symbol, which occupies the Middle Direction, a Pa-Kua is formed and an energy pattern is developed: 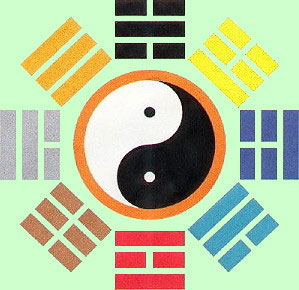 This sign, hung on walls, will confer upon people a peaceful, balanced, and healing vibration; because the sign represents peace, healing, balance, love, and power. For details and testimonials about its power go to Tao of Mastery.

The person who does the right thing while following a path in the right direction, at the right time, will meet with longevity, peace, and success; if not, the outcome of the future will be completely reversed. This is a subject covered by Taoist Directionology, which will be discussed later.

The principles of the Eight Pillars of Taoism are explained  in whole in the book The Great Tao,

(or see Dr Chang's website www.thegreattao.com for a basic introduction)

The second step of the “evolution” involves transforming the eight trigrams into eight hexagrams, by applying a mathematical formula, X x 2 = 2X (where X = trigram), to every trigram. These are the results:

Each hexagram then gives rise to seven more hexagrams, resulting in eight groups of eight hexagrams, or sixty-four hexagrams total.

Each new hexagram is derived from the “movement” of Yin and Yang lines of the previous hexagram. “Movement” is the conversion from Yin to Yang and Yang to Yin, and it begins from the bottom of a hexagram and progresses upwards. This pattern of change is illustrated above. 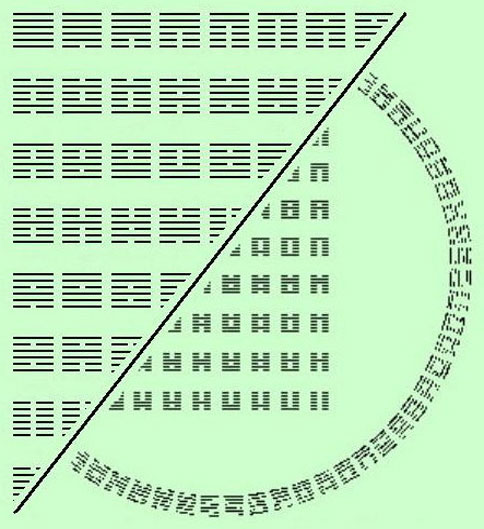 The first group called Heaven, describes the nature of success, creation, leadership, power, and social position. It also describes the problems associated with these phenomena and the best way to face and solve these problems.

The second group called Water, deals with danger, risk, challenge, death, the military, and the associated problems and solutions.

The third group called Mountain, describes the phenomena of stability, retreat, tolerance, aggregation, wealth, and their associated problems and solutions.

The fourth group called Thunder, deals with stimulation, commencement, establishment, and the problems and solutions associated with these phenomena.

The eighth and last group called Lake (marsh), deals with the phenomena of happiness, surroundings, finance, emotional connection, modesty, poverty, entertainment, overflow, and inertia. So also described are their associated problems and solutions.

Moreover, the sixty-four hexagrams can be arranged in many forms. These arrangements are used for astronomy, geomancy, construction, and other special purposes. Because these subjects have no urgent bearing upon daily living, details of the arrangements will not be given―it will be of little or no interest to many people.

The secrets contained within the Eight Pillars will be disclosed in the order defined by the Pa­Kua. On the Pa-Kua, the universe is divided into heaven and earth. The boundaries of heaven begin with the Heaven trigram and end with the Thunder trigram. The boundaries of earth begin with the Wind trigram and end with the Lake trigram. Earth is depicted as forming a slanted horizon with heaven, because the axis of earth the planet is slanted: 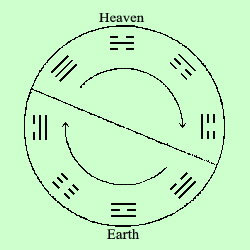 The order of the universe is read as follows: one begins at the Heaven trigram and reads across the heavens toward the right until one reaches the Thunder trigram. Then one begins to read across the earth by starting at the Wind trigram and moving left until one reaches the Lake trigram. Therefore, the first secret to be unveiled must be the Tao of Philosophy, symbolized by the Heaven trigram.

When these subjects are studied and practiced, Tao will naturally flow through the person, less transgressions are made, and the world takes one step closer to being in harmony more often; benefiting countless generations to follow.

True understanding of Tao comes from recognizing these eight subjects cover all of life necessary to live longer, healthier, happier and wiser lives (the four pillars of Taoism). The wise person is the one that studies AND practices the eight subjects.

Blessings to all that hold the Tao as if it were not their own.